The State of Commercial Real Estate

Mr. Zetlin led a lively one-on-one discussion with Andrew Kimball, President and CEO of New York City’s Economic Development Corporation (NYCEDC). The forum was one of Mr. Kimball’s first public events since taking on this critical role after being appointed to the position by New York City’s Mayor Eric Adams.

In “Top Priorities for Executing the Mayor’s Economic Blueprint,” Mr. Kimball pointed to the ways in which Mayor Adams has embraced the private sector and the importance of collaborative public-private partnerships to spur growth across all of New York City in the commercial sector.

Mr. Zetlin called it a “critical piece of the Mayor’s agenda,” stating that the NYCEDC, in handling a $3.7 billion capital plan, “will have a major impact on the future of New York.” He further pointed out that the NYCEDC will be playing “arguably the most major role of reshaping New York’s energy policy.”

Mr. Zetlin asked Mr. Kimball what enticed him to take on the critical role as CEO and President of NYCEDC, drawing an enthusiastic response. “There is still booming growth in this town,” said Mr. Kimball. “There are very positive signs on the horizon. We now have a mayor in Eric Adams who embraces the private sector, is going to stand with the private sector and will drive growth and job opportunity. I want to work for this Mayor at this critical juncture for the city.”

Both men acknowledged that this growth is not possible without dealing with the rising concerns of public safety. “It’s the prerequisite,” said Mr. Kimball.

Noting how Mr. Kimball had previously transformed the Brooklyn Navy Yard and Industry City during his distinguished career of urban redevelopment. “The Industry City stats are impressive,” Mr. Zetlin told the audience, which represented diverse elements of the real estate industry. “800,000 square feet of leasing space since the Pandemic started, adding about 100 jobs a month.” He asked Mr. Kimball, “What experiences do you take away from those jobs that will fuel your vision?”

“It’s about targeting the right sectors,” Mr. Kimball quickly responded. “It’s about focusing on the industries of today and not yesterday. It was true of both the Navy Yard and Industry City.”

He noted that “today’s manufacturing looks very different than the 1950s. It’s nimble. It’s high-tech. It incorporates all sorts of design elements. It touches sectors people would have never thought about,” referencing film and television and “even life sciences, when you think about lab space, R&D and making products.”

Beyond identifying the industries of tomorrow, Mr. Kimball stressed the importance of “creating an ecosystem. Today’s young makers, creatives, the tech CEOs of the future want to be around diversity. Not just a diversity of sectors, but a diversity of people, culture. That is why young people continue to come to New York. We do have a challenge getting people to come back to the office. But at the same time young people continue to flood into New York, partly for our diversity.” He added that we need to celebrate that businesses want to be in New York because of the diversity of the talent pool.

His third takeaway from his previous successes is the opportunity to engage with academic connections, such as New York’s colleges and universities, to create workforce development pathways.

Mr. Zetlin asked Mr. Kimball to identify the major considerations or priorities in Mayor Adams’ economic blueprint. Mr. Kimball said the blueprint contains more than 70 initiatives. He explained that it stretches well beyond midtown, encouraging and facilitating growth both downtown and through all five boroughs. He said that commercial hubs outside Manhattan “really thrived” during COVID when people were working from home and “going to their local retailers, to their local coffee shop.”

“You want strong commercial hubs whether it be Jamaica, Broadway Junction or the South Bronx to truly have an equitable and long-term sustainable city,” Mr. Kimball advocated with an emphasis on the quality of life in such areas. “Number one is focusing on those commercial hubs with things as simple as cleaning the streets.  EDC has an initiative around picking up garbage. We have supported the Department of Sanitation in adding SWARM AT teams swooping through neighborhoods and removing thousands of tons of garbage.”

Mr. Kimball was then directed to turn his attention to key industry sectors. “It’s really building on some of the growth we have seen in recent years and doubling down on it. Life sciences is a great example there. This is a generational thing. This Mayor is going to try to take it to a whole new level. So, we have a billion dollar 10-year plan that will create over 40,000 jobs in life sciences, $82 billion in economic development. It is happening today. Investment in life sciences is exploding in New York City. We are competing with Boston and San Francisco like never before.”

He then showed how this project is an example of a citywide initiative. “We all know 1st Avenue is one of the hubs for life sciences.  We think there is a real unique opportunity in that whole Brookdale campus area to really grow life sciences and have Kips Bay become the Kendall Square of New York City. We have biotech growing in the Brooklyn Navy Yard. We have biotech growing in the adaptive reuse of old industrial buildings on the far west side. There are life sciences happening in Long Island City.”

Mr. Zetlin focused the discussion on life sciences on the partnership between the private and public sectors. Mr. Kimball added, “about half is capital investment that helps leverage private development and adaptive reuse of old space. The other part is incentives, such as long-term tax breaks if you convert space into lab space. We hope this is one of the touchstones and legacies of an Adams Administration, a tremendous focus on social impact.”

“Not only do we want to partner up with the private sector and help leverage enormous private investment, we want to make sure that opportunities in sectors like life sciences and other growing sectors in the city really embrace the opportunity so that the workforce is diverse.”

He then tied together the social and business impact. “This is not just doing the right thing for our city. This is really smart business. This is part of the reason people really want to be in New York. Our diversity is one of our greatest strengths. We’ve got to embrace it.”

Mr. Zetlin then asked Mr. Kimball to expound upon another key industry for bringing to New York and retaining global talent: the tech industry.

“Thank God for the tech industry,” Mr. Kimball happily responded. “Think of all the square footage that was leased during COVID. It gave us hope that we were going to come out the other side of that. Think about all the young people that are moving here, all the talent that is coming out of our schools that are going to that industry. Think about how well-paying all of those jobs are. Think about cryptocurrency and fintech. 46% of all the VC investment in crypto is coming to New York City. Another key sector we’ve go to embrace.”

Mr. Kimball was asked by Mr. Zetlin to cite other priorities for EDC under the Adams’ Administration. He quickly spotlighted two sectors, one long-established in New York, the other relatively new: food distribution and offshore wind.

The offshore wind industry, by contrast, is a fairly new one “created out of whole cloth.” He shared a poignant example of its growth here. “Eight years ago, 40,000 acres of water off New York Harbor was leased for $40 million. People gasped! Three months ago, five new offshore developers leased four times that amount of water, each of those leases in the high hundreds of millions, a sense of where the market is.”

Mr. Zetlin concluded by aptly summing up the entire discussion: “It will capture everyone’s attention.” 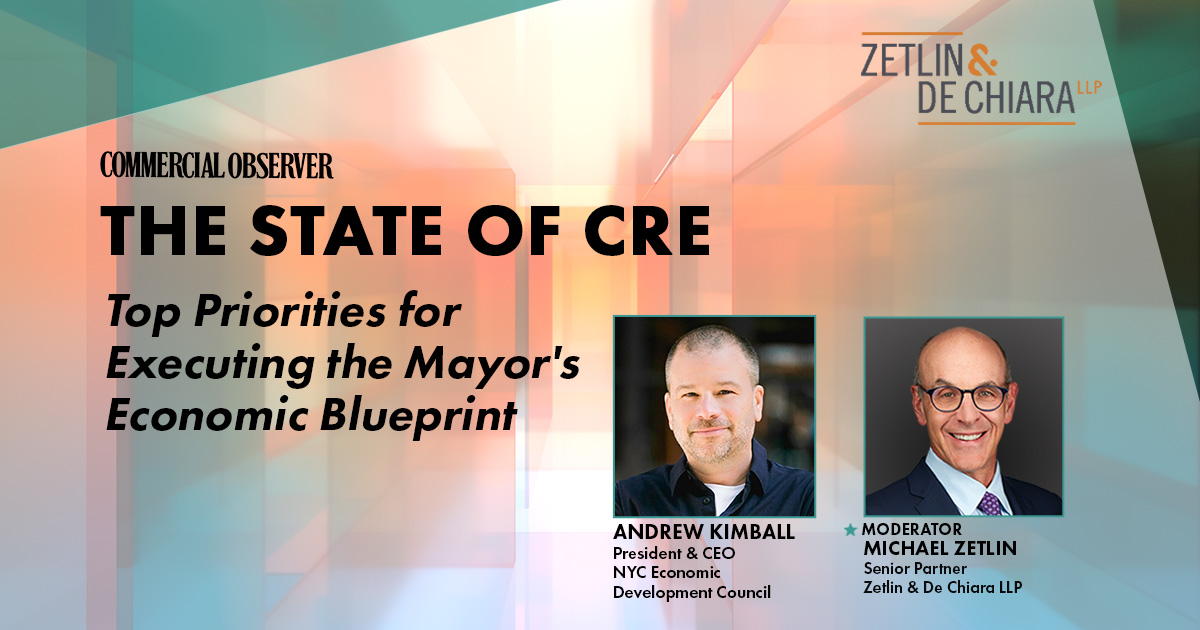