LL 97 was passed by the City Council in April 2019 as part of Mayor de Blasio’s New York City Green New Deal. The pioneering law requires most buildings over 25,000 square feet to meet new energy efficiency and greenhouse gas emissions limits by 2024, with stricter limits coming into effect in 2030. The law is aimed at reducing emissions produced by the city’s largest buildings by 40 percent by 2030 and 80 percent by 2050. Buildings currently account for about two-thirds of New York City’s greenhouse emissions.

In the words of Michael De Chiara to open the panel: “It’s a paradigm shifting event. New York will now be leading the nation in terms of its green and carbon footprint initiatives. The idea is to make New York the paradigm of sensitive environmentally responsive designs.” Mr. De Chiara then asked the panel: “Why is it important for New York City to be leading that charge?” (7:18 – 7:38)

Scott Frank responded that “my thesis is that New York City is in a singular leadership position when it comes to carbon production, in part due to a fortuitous coincidence with a parallel effort happening within New York State.” Mr. Frank explained that, in 2019, “New York City passed “a landmark piece of carbon production regulation setting absolute caps on how much carbon emissions buildings in New York City, greater than 25,000 square feet, can emit in a year. Period.” That was Local Law 97. (9:20 – 10:01)

“A caveat is that CLCPA requires the New York State electric grid to become completely carbon-free by 2040.” Mr. Frank then declared that “my contention is that those two put together, put New York City on a pedestal, ahead of California, ahead of any other city in the U.S.” He then posed another key question: “Why aren’t we capitalizing on that opportunity?” (10:27 – 11:01)

Mr. De Chiara noted that, for real estate companies, the new law is “radical in that it is results-driven. It doesn’t matter how you get there. You better reduce your carbon footprint. It’s not enough to have a good faith effort.” He added that the timing gives New York “an unusual competitive advantage over other cities and real estate markets because the world is shifting. Everyone needs to deal with the environment.” (11:50 – 12:35)

The panel concurred that the new buzzword is ESG (Environmental, Social and Governance). You will need to demonstrate that you are environmentally sensitive.

Mr. Frank illustrated the point: “Go on Yahoo! Finance right now and put in your favorite ticker. On the far right tab, right at the top, says Sustainability. Click on that and there is the ESG score for that company. So, this is not just some obscure reporting statistic.” (13:22 – 13:37)

Ms. Kanner pointed out that the new sensitivity comes with “tremendous pressure.” She explained that every single investor in the real estate sector feels that pressure. “One of the first questions they ask is: ‘Where are you on ESG? Talk to us about where you are environmentally, sustainability-wise.’”

She elaborated that “first and foremost is always sustainability. How are we getting involved in renewables? Our tenants are on the front lines. Their employees are pressuring them. We are dealing with this on an everyday basis on a lease by lease basis, every investor who invests in our funds - and it’s billions and billions of dollars. We’re talking about a lot of people. We’re talking about institutions. We’re also talking about individuals.” (14:10 – 15:07)

Mr. Giannetti asked about the timing: “Why New York now?” He then answered his own question. “New York has always been the nexus of leadership of many industries and many innovations. The leaders here are stepping up to look at this not only as an opportunity but also as a collective responsibility. Everyone understands the importance of taking action. (15:30 – 15:51)

“It is bubbling up through clients, at least for the past decade, especially with more and more technology companies coming to New York City. The people who work for those companies are looking for values aligned with their personal beliefs and their employers. More and more they are shifting towards being responsible to the climate.” (15:55 – 16:25)

Mr. Cook expanded on that thought by noting the realization that “we could make buildings quantifiably better for people in health and wellness. Recruitment around not just health and wellness but also social equity issues. Environmental justice and social justice are bound together. People seek meaning and purpose in their life.

“One of the ways in which they do that is to work for companies that have similar values. Recruitment and retention of talent - ESG investing is very much driven by that. We can do that with the types of buildings. Government can make a difference. Governmental intervention sets the standard and then we get into something called marketplace transformation.” (18:53 – 19:18)

Then bringing it back to a key element for his own business, Mr. Cook stated that “people come to us to design their workplace because they are thinking about the quality of people they want to recruit and retain. Carbon reduction is one of the ways.” (19:21 – 19:33)

“92 percent of Generation Z would switch to a company that is ESG-focused,” Ms. Kologlu revealed. “This is huge. This means that the market is changing. There is a big wave that is coming. Local Law 97 is not enough by itself to convince that New York City is the city to be. We need to go further.” (20:00 – 20:30)

Mr. De Chiara then related a conversation after 9/11 with the late John Zuccotti about the future of New York City. “What makes New York tick is that the whole city is set up to attract that demographic of 25 to 40 years of age, people who have the best education, the best background and who have that ambition. And when you attract that talent pool, then you attract all the companies who feed off that talent pool that’s kept New York New York for 150 years.” (21:45 – 22:12)

Then relating the conversation to current times, he asserted that “everybody is very sensitive to what’s going to draw and continue to draw that demographic to New York. And make no mistake about it, what we hear loud and clear is ‘you better be environmentally sensitive.’ (22:28 – 22:47)…We find ourselves at a fantastic inflection point that’s so fundamentally positive for New York City. Now we will be the leaders in terms of an environmentally sensitive city.” (23:05 – 23:47)

Mr. Frank then set up a paradoxical question. “My perception is that Local Law 97 is perceived as this albatross around the neck of real estate. It’s an unfunded mandate. It’s unprecedented. The fines can be substantial. How is this pro-business, especially at a time like this?” (24:34 – 25:03)

He then addressed the situation in terms of who will occupy those buildings. “We have commercial owners who need tenants, quality tenants, credit-worthy, Triple-A,” adding that the tenants also need talent and that “climate change and environmental issues are high on their list. The polling keeps getting stronger and stronger.” (25:06 – 25:45)

“The punchline of the thesis is: what can we do at a time like this where real estate is a big part of the New York economy. Why aren’t we shouting from every rooftop, bring your business to New York City; talent come back to New York City and work! It’s a virtuous cycle. It helps the economy. It takes care of companies which need to do better in terms of ESG reporting. And it brings meaning to the next generation of workers. Why isn’t that happening?” (25:46 – 26:25)

LL 97 “disrupted the ecosystem,” Ms. Kologlu proclaimed. (29:50 – 30:04) “Go beyond Local Law 97 as the challenge and embrace this opportunity to create better spaces, better well-being conditions for people, more efficient, more customizable buildings and designs. And go beyond that.” (30:31 – 30:46)

She then offered a challenge: “Can we go one step beyond? Not think about just reduction but how can we contribute full carbon absorption from the air?” (31:05 – 31:11) She suggested the use of air-capture technology and bio-materials. (31:25 – 31:28) “Can our industry look beyond Local Law 97 as a challenge to embrace this moment to attract the right talent, to give the right message not just in the U.S., but to the world, and go beyond looking at the challenge and turn it into an opportunity.” (31:51 – 32:09)

Part of that transformation is to renovate existing space thoroughly to meet the new requirements and requests. Ms. Kanner gave the examples of repositioning buildings such as 1100 Ave. of the Americas, 5 Manhattan West and the former 666 Fifth Ave. “Between those three buildings over the last four to five years,” she detailed, “we’ve saved over 50,000 metric tons of embodied carbon by reusing the structure,” adding that they saved more than 12,000 metric tons a year in operational carbon. (36:22 – 37:00)

“There are so many opportunities when you look at a building to not necessarily tear it down but to take a look at what are the fundamentals of that property, such as location, and then build on that.” The overwhelming choice with these buildings, she asserted, was to rebuild in place. (37:01 – 37:37)

Mr. Frank then amplified the point. “Over the life of a building, when you add up all the carbon, the operational carbon like we are talking about in Local Law 97, the energy that gets used every year. Add that up over 30 years, compared to the embodied carbon that it takes to build a building like that in a modern era. It’s like half. There is an inconvenient truth here.” (37:52 – 38:28)

“Here is another kind of interesting trend. As we do better and better with operational carbon, make buildings more efficient, clean up the grid and make it green with less and less carbon associated with operating a building every year, then this balance shifts even more dramatically,” Mr. Frank contended. (38:31 – 38:53)

He then speculated that “in a city with more than one million buildings, I wonder if you look down the road 20 years and say, ‘how much new construction will there ever be?’ Because the carbon calculus will get so tilted that if you have a landmark building on Park Ave. and transform that into Class A real estate, the carbon footprint of that project will be so much different.” (38:56 – 39:43)

Expanding on that thesis, Mr. Cook observed that “London is ahead of New York in addressing embodied carbon. Half the issue is embodied carbon. New York has another sales point. We have a remarkably robust existing building stock that lends itself to repositioning the workplace of the future. We are going to see more and more of this as carbon becomes more of a focus.” (40:28 – 41:14)

Ms. Kologlu elaborated further that the current law recognizes operational carbon and needs to go deeper. “It must start recognizing embodied carbon. The next step must be this.” (41:25 – 41:29)

She then raised several key questions. “How do we find the right balance? How do we invest in things like low-carbon materials, low-carbon construction processes and address the grid so our embodied carbon must go down?” (42:47 – 42:59)

Bringing it back to LL 97, she raised another key question while reminding the panel that “Local Law 97 is the push. The pull is the market demand. The pull is the incentives. How do we incentivize the market and let them come along to really make the big impact we are looking for?” (1:08:50 – 1:08:14)

He then circled back to the focal point of the panel discussion, which will lead to others hosted by Zetlin & De Chiara LLP in conjunction with JB&B. “Local Law 97 impacts so many other things in a positive way. What surprises me is how positively this impacts New York City,” (1:02:16 – 1:02:29) adding that “We need to be focused as an industry on what we can impact. Local Law 97 is where we make a significant contribution.” (1:02:50 – 1:03:00) 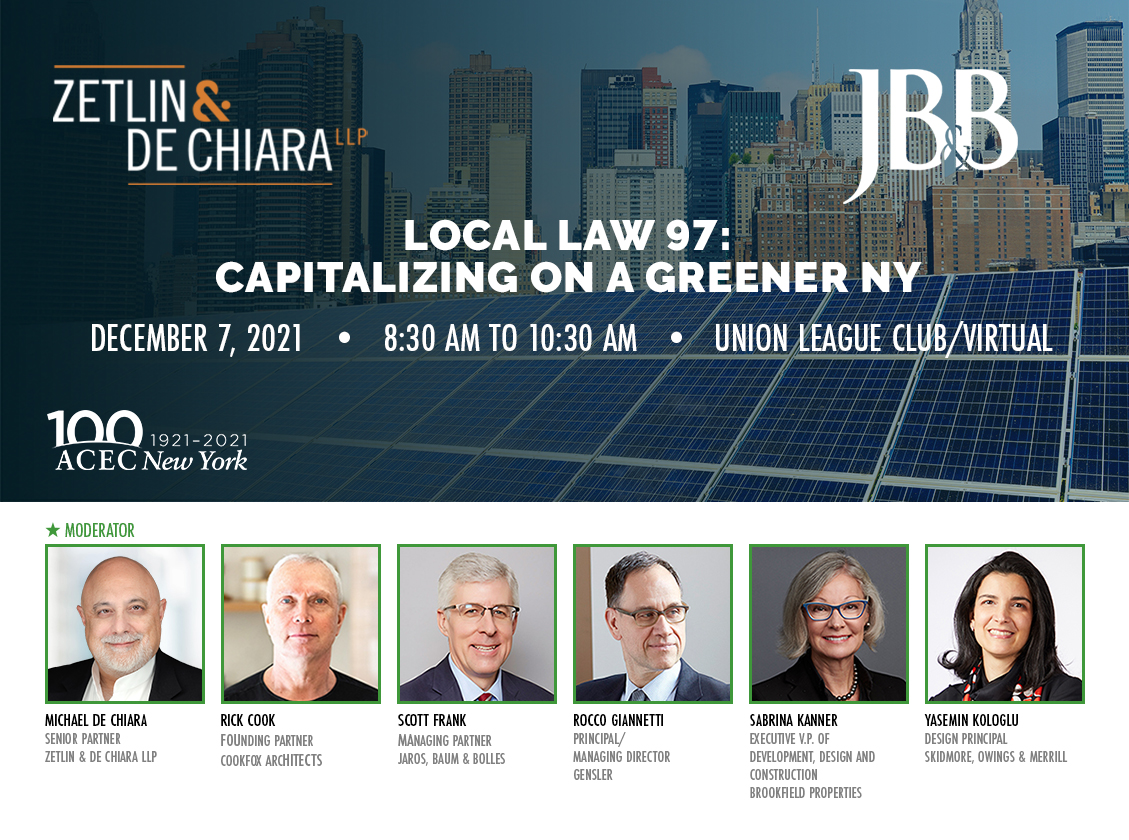