Development Update: A Client Conversation with Izak Senbahar on 56 Leonard 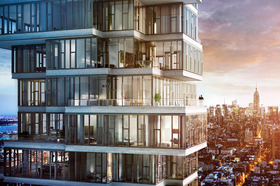 Izak Senbahar, President of the Alexico Group has spearheaded the development of some of New York City’s highest-profile luxury condominiums including the Grand Beekman, 165 Charles Street and The Laurel as well as the condo conversion of the Mark Hotel, featuring world-class architecture and design. His latest endeavor is no different. Michael Zetlin, Senior Partner of Zetlin & De Chiara LLP, spoke with Mr. Senbahar about it recently.

The much-anticipated 60-story condominium at 56 Leonard Street, designed by Pritzker-Prize winning architects Herzog & de Meuron, is currently rising in Manhattan’s sought-after Tribeca neighborhood. This latest project has required the patience and perseverance to withstand an historic recession. Its groundbreaking design is reshaping the Manhattan skyline and the condominium has recorded nearly $1 billion in sales over the past nine months.  56 Leonard is a shining example of Mr. Senbahar’s passion, dedication and discerning eye for detail.

The development process begins for Mr. Senbahar well before hiring an architect. It starts with the project site. He walks the land repeatedly and asks, “What kind of building should be here?” For 56 Leonard, Mr. Senbahar visited the location at many different times of the week and of the day to get a sense of the light and views as well as to grasp the architectural context and fabric of the neighborhood.

“A site like 56 Leonard doesn’t come around often. It is large and the zoning allowed for a very tall structure. While the area borders on two historic districts, there is no unifying architectural language or design dialogue in the immediately adjacent blocks,” describes Mr. Senbahar. “I wanted to move in a contemporary design direction. I wanted to recreate the loft-style living that Tribeca is known for in a tower configuration that incorporated glass expanses to capitalize on the helicopter views.”

“Based on their existing work, I knew they were very talented. I wanted to have a conversation about what they envisioned for this project and get a sense of how they worked,” says Mr. Senbahar. “I found them to be extremely creative, professional and disciplined in their approach. Like all members of my project team, I wanted to know that they were a good fit. I left their offices feeling confident that they were the right choice, and I communicated that to my development partners.”

Mr. Senbahar waited longer than expected for 56 Leonard to begin its journey skyward and for Herzog & de Meuron’s stacked, cantilevered design to take shape, but the project is now slated for completion in 2015 and only a handful of the 145 residences remain unsold.

Mr. Senbahar is particular about the team he hires. That is perhaps why he has, throughout his career, chosen to work with some of the world’s most renowned architects and designers including Richard Meier, Jaques Grange and Shelton, Mindel & Associates.  His aesthetic sensibility helps build strong relationships with his design teams which has resulted in exceptional projects.

“I’ve learned that you must choose compatible partners and be clear about their roles, responsibilities and goals from the beginning. The clearer you are, the more successful the relationship will be especially in the face of challenges. 56 Leonard was meant to be a five-year project and we are now in our ninth year. When you have team members that trust each other, understand the business and have long-term vision and commitment, you can overcome major obstacles. We are working to create an exceptional building of architectural significance and unparalleled quality that resonates with buyers. Based on the response from the market to date, we are optimistic about achieving our goal.”

Mr. Senbahar indicated that working with strong team members is critical to the success of any project. “Whether it is designers, engineers, financial partners or counsel, having talented team members makes all the difference. In my experience, the more talented team members are, the more open they are to constructive criticism, dialogue and collaboration. I develop relationships with design professionals and try to foster a strong sense of camaraderie. I am involved in every aspect of a project and every decision, no matter how small. When a developer is that engaged and invested in the process, the designers and architects appreciate that.  I think it gives them a level of comfort. They trust me to deliver their vision,” says Mr. Senbahar.

A Calling for Real Estate

Mr. Senbahar did not begin his career in real estate development. Though he received his undergraduate degree in engineering, he then earned an MBA from NYU and worked as a trader in the financial sector for several years. An international construction company then approached him about leading the development of a high-rise in Manhattan. While he had no experience, he accepted the challenge. It was during that project he realized that real estate was his calling and he solidified his style of detail-oriented management and design-forward development.

“The aesthetics of a project mean a great deal to me,” says Mr. Senbahar. “I know what I like and don’t like. If I am unhappy with the design or an element of the design when a project is complete, I don’t have the same sense of pride.” He continued to say, “I tend to be a perfectionist. Perfectionists are hard on themselves and those around them but the goal of perfection is worthwhile.  I will labor over details because you never know how much a small thing will ultimately matter to the buyer of a condominium or a guest in a hotel.”